Last year, I went home for about a month after quitting my job in NYC, and found myself feeling bored and creative at the same time. I paid a visit to the place where I sank all of my childhood pocket money: the arts and crafts store.

I wandered around the aisles, not really sure what my upcoming project was going to be. I was about to settle for a pad of heavy-duty paper and some watercolor paints and brushes, when these cheap, cute little decorative birdhouses caught my eye. They were $1 each, and they were definitely too small to house any real bird. I snatched up four of them, bought some acrylic paints, and went home to ponder how I would decorate them.

I’ve gone to my share of arts and crafts themed birthday parties (remember “Plasterpiece” painting parties?) when I was a kid, and I remember I always hated following the painting techniques suggested by the pre-painted examples. It felt like such a waste to me to purchase a bunny plaster, for example, and paint the whole thing gray. I didn’t care if that was what bunnies might have actually looked like in nature.

Instead, I’d prefer to paint the whole bunny purple or mint green, then turn the bunny’s plaster body into a canvas for a cheeky collage, or maybe a tiny, self-contained story. Maybe I’d paint the night sky and stars onto its back, or think myself smug and paint tiny multicolored rabbits onto it, maybe being chased by a villainous fox.

I decided I would reject the straight angles and lines offered by the birdhouses, and instead treat the entire surface as my canvas. But what to paint? Bird.. houses… Houses… of Westeros! I’d gotten ridiculously addicted to Game of Thrones recently, and decided to paint some playful tributes to the series.

I covered them in base color corresponding to the fields of the sigils, let them dry for a few hours, then used pencil to lightly sketch in the outlines for the foreground. House Stark of Winterfell came first: 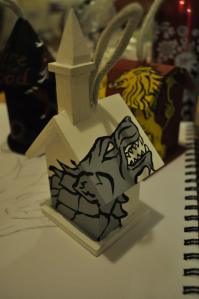 The first day, I covered four of the Great Houses: Stark, Lannister, Targaryen, Baratheon. House Targaryen was a bit tricky, because after it was covered in black paint, I had to hold it at a certain angle so that the light reflected off the pencil markings. I also had to use more than one layer of red paint to make the dragons opaque. 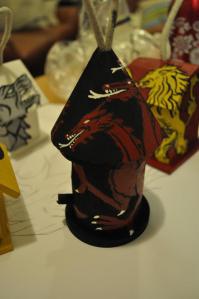 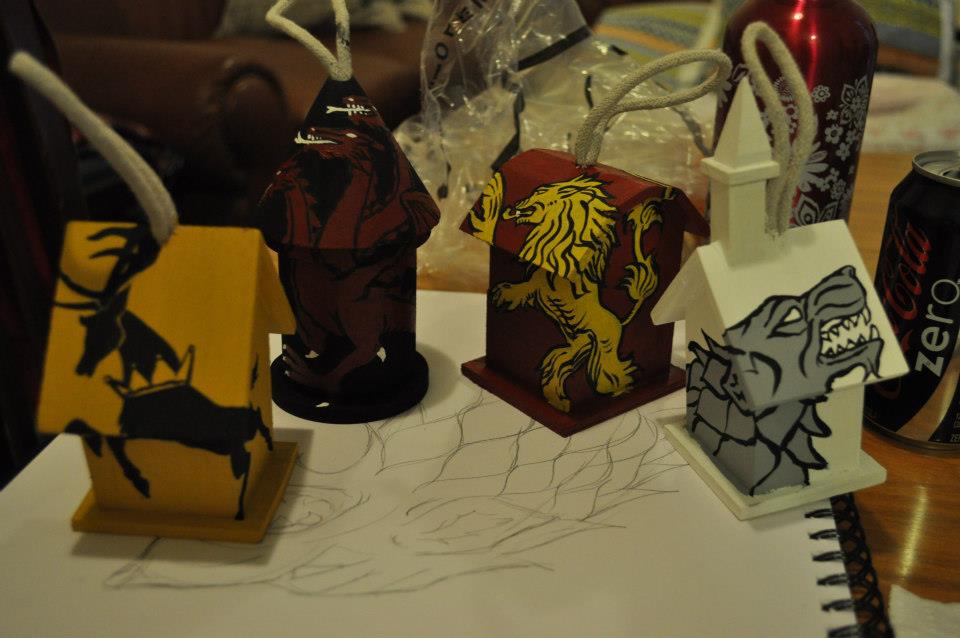 The first set of four, completed, along with a practice sketch of the Stark sigil. A few days later, my creative craving was still not satisfied, so I went back to the store and bought more birdhouses and more paint colors. I found House Tully especially fun to paint, because the design lent itself to being draped over the roof of this house like such: 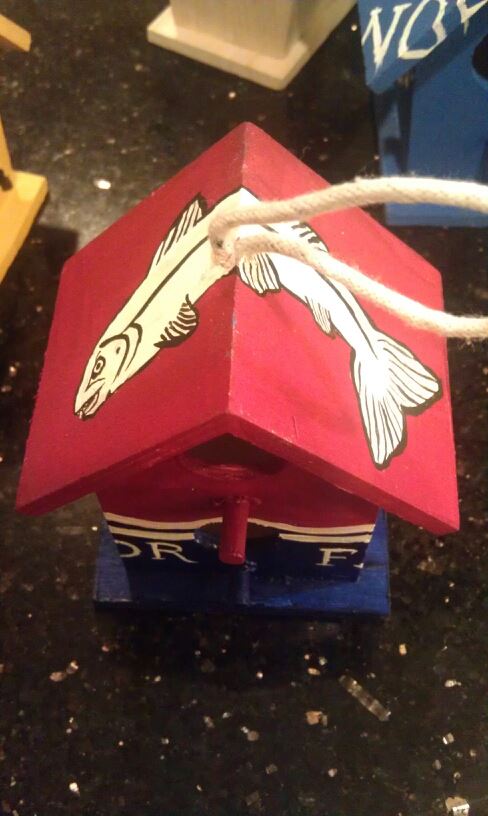 I added a few smaller houses with sigils that I found fun: 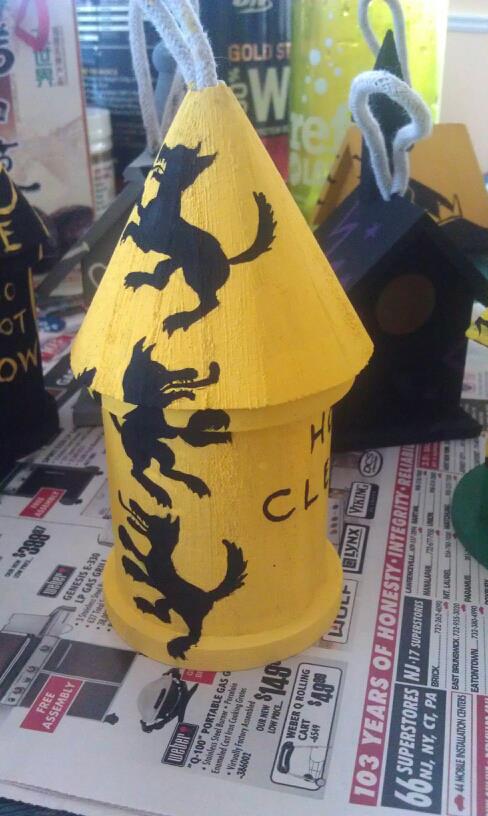 And some of the more notorious ones as well… 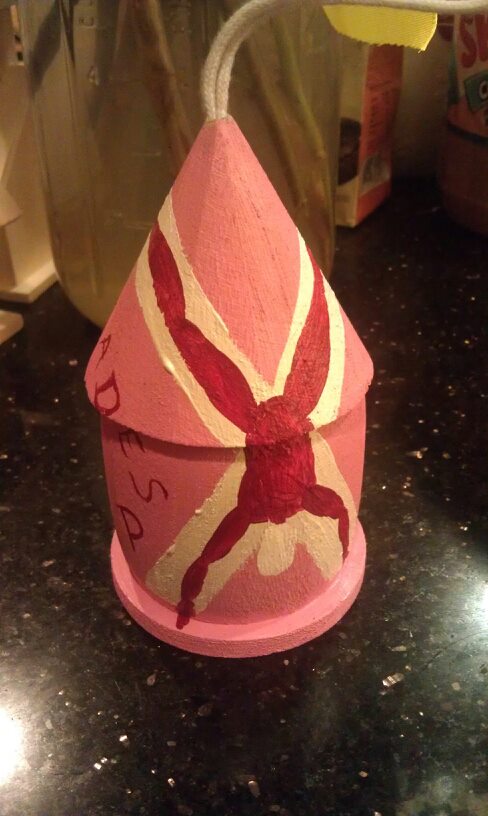 Here is the full set that I completed over a few days: 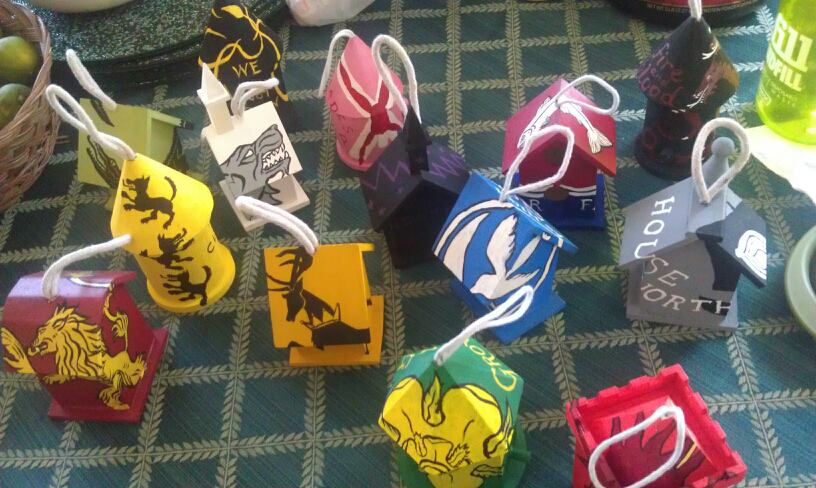 Some came out better than others. If I have time, I would probably go back and add some bold outlines to House Martell, as the shades of orange and red I chose to use didn’t contrast as brightly as I hoped when they dried. Maybe I’ll also go back and add some more grisly detail to House Bolton as well. Not all of these are main houses, so not all of them have words — you can notice words in some of them, like House Greyjoy at the top and the edge of House Tyrell at the bottom. For the houses that GRRM never gave words, I just painted “House Clegane” or whatever on the opposite sides. In my own opinion, Lannister and Tully came out the best.

I wish I could say that these are available on Etsy or eBay, but the truth is that I’m too lazy to attempt to sell them online. They’re all in New Jersey at my parents’ house right now, but maybe one of these days I’ll get around to listing them…